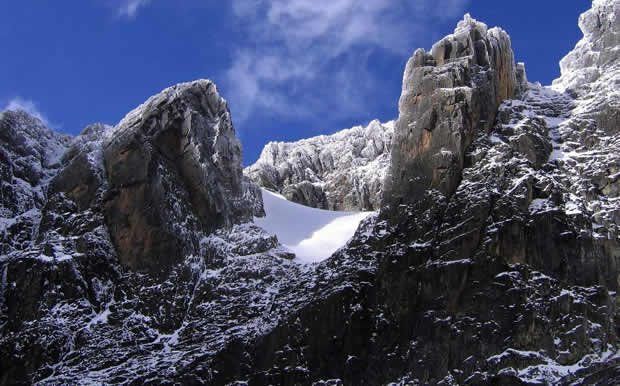 Rwenzori Mountains National Park is found in southwestern Uganda. This is on the border with the Democratic Republic of Congo (D.R.C.) and Virunga National Park.

The park is virtually 100,000 hectares in area and was gazetted in 1991 and incorporated as a World Heritage site and as a Ramsar site in 1994 and 2008 respectively.

This was because of its outstanding natural beauty. This park covers most of the centre and eastern half of the range. The Rwenzori national park includes Africa’s third, fourth and fifth highest peaks in an alpine highland of glaciers, snowfields and lakes which make it one of Africa’s most beautiful mountain parks. Furthermore, it protects five distinct vegetation zones; several endangered species and hosts over 70 mammals and 217 bird species including 19 Albertine Rift endemics.

When the Rebels occupied the mountains as of 1997 to July 2001, the lack of security prevented any conservation. Subsequent to its inscription on the list of world heritage in danger. They were to confer with conservation NGOs and other international organizations there in the region. Also they were to make all those involved in the disagreements aware of the need to respect the site’s world heritage values. They were also to increase projects to sustain its administration.
Even though not as high as Mount Kilimanjaro, and considerably lower than Mount Kenya; the Rwenzori mountains have a bigger alpine area than either.

The Rwenzoris are a crucial water catchment area. The upland bogs act as a huge sponge which absorbs and regulates the rainfall. They are the uppermost and most stable source of the river Nile; feeding it via eleven rivers and Lake Rutanzige (L.Edward) and Lake George in Uganda. They supply 500,000 Ugandans who depend on the mountain forests for their water and defense from flooding as well as for irrigation, hydro-electric power and inflow to the fisheries of lakes Rutanzige and George.

Rwenzori mountains national park is home to the Uganda hiking safaris and is also famous for its unique and lush flora, making it the most visited mountain park by tourists for its magnificent views and mountaineering activities

This park habours the only block mountain in east Africa and even the third highest peak in the whole of African Continent, the Rwenzori Mountain ranges. The lower slopes of the Rwenzori Mountain are blanketed with bamboo, moorland, and diverse moist montane forest. And the mountain side is a composite of the big tree-heathers as well as the colorful mosses with beautiful flowers and giant lobelias.

The dry plains which surround this Rwenzori alpine land are known for an unusual luxuriant acid soil adapted flora at higher altitudes which includes many species endemic to the western rift valley. This occurs because of the high precipitation, cloud cover and humidity combined with high levels of ultraviolet insulation and the low diurnal temperature variation. There is vegetation zoning with changes in altitude.

The Park is a habitat to over 217 species of birds; including those species that are endemic to the Albertine Rift. From the total number of 217 bird species, 17 species are endemic to the mountain Rwenzori Park making Rwenzori an Important Birding Area (IBA). The forest zone at an altitude of 1800m contains a variety of birds including the Rwenzori Turaco, Handsome Francolin, Barred Long-tailed Cuckoo, Blue-headed Sunbird, Long-eared Owl as well as Cinnamon-chested Bee-eater, Rwenzori Batis, Archers’ Robin-chat, White-starred Robin with even the rare Montane Sooty Boubou, Greenbuls, Lagden’s Bush Shrike, Slender-billed Starling, Strange Weaver, as well as the Golden-winged Sunbird, and several diversities of Barbets, Apalises, IIladopsis, Flycatchers and Crimson wings.

The Rwenzori Mountains are the homelands of the Bakonzo and Baamba peoples. The Bakonzo are a Bantu-speaking people who have lived in the foothills of the mountains for many generations; whose culture is adapted to the steep slopes and climate of Rwenzori.

The high Rwenzori comprises six different Mountain complexes; the highest of these being, Mounts Stanley (5,109m), Speke (4,890m) and Baker (4,843m) – Despite of the fact that they are located just miles north of the equator, they all bear permanent snow and glaciers. The equatorial snow peaks can be reached by hikers through the Central Circuit and Kilembe Trails, making it Uganda’s prime hiking safari destination.

The Rwenzoris are wetter than other East African mountains, with annual rainfall varying with altitude from 2,000 to 3,000 mm, and being heaviest on the eastern slope, which faces the prevailing winds. On the Uganda side heavy rain can occur any time of year, but the rainiest periods are from mid-March to May and from September to mid-December.

The park provides opportunity for nature walks within the central circuit zone. These include trails up to Lake Mahooma and Buraro chimp forest; walks through the communities of Kichwamba to reach the Karangura ridge; and hiking to Bundibugyo area through Bwamba pass.

The communities of Ruboni and Turaco View also offer guided forest walks of various lengths just outside the park. Visitors can follow the River Mubuku, and glimpse views of Baker and Portal Peaks as they hike up to 2,300m above sea level. On a clear day it is even possible to view the snowcapped Margherita Peak – a truly spectacular sight. Along the way, keep an eye out for chameleons, squirrels, vervet monkeys and many birds.

Tourists while in Rwenzori Mountains National park enjoy an adventurous Uganda hiking safari that is quite amazing and it takes place along the 2 main hiking routes, namely:

The Central Circuit Trail: This challenging, seven-day climb provides a circular tour of the high Rwenzori. From the trailhead at Mihunga, the route ascends the Bujuku Valley via Nyabitaba for acclimatization before reaching the peaks. Clients joining the Central Circuit after Bujuku will traverse the Scott Elliot and Fresh field passes to descend through the Mubuku Valley. Climbers can scale the snow peaks though many consider the exceptional scenery ample reward for their exertions.

Kilembe Trail: The recently reopened Kilembe Trail ascends the southern slopes of the Rwenzori from a trailhead at Kilembe near the town of Kasese. The route along the lovely Nyamwamba Valley passes glacial lakes and some stunning viewpoints before joining the Central Circuit at Lake Kitandara. The standard route scales Mount Baker though the scenery makes shorter treks rewarding enough.

Besides a high level of physical fitness, climbing Rwenzori Mountains, visitors should ensure that at least the following equipment is on their custody prior to hiking the Rwenzoris;

Discover the peaceful farming village of Ruboni, home to around 2,000 Bakonzo, in the foothills of the Rwenzoris. Walk with the villagers as they demonstrate their daily activities, from tending to their animals and crops to preparing meals with the freshest ingredients. Meet the blacksmith, traditional healer, basket weavers and storytellers, and enjoy a vibrant dance performance accompanied by lively drumming.

Alternatively, your guide will lead you along the rocky Mubuku River. Ruboni means clear water in the local language of Lukonzo, and you will follow this crystal-clear stream, passing villagers carrying crops and wood. As the trail winds upwards, your guide will point out many colorful native birds such as the Rwenzori Turaco, tiny sunbirds and Cinnamon-chested Bee-eaters. There are also chameleons, squirrels and vervet monkeys.

Look out for Baker and Portal Peaks rising above the forests. On a clear day the snowcapped Margherita Peak is also visible – a truly spectacular sight.

Follow this fascinating six to seven hour trail through the holy valley and other sites of great cultural significance to the Bakonzo tribe. A community guide will introduce you to the traditional healer, explaining his powers, known as muhima; and to the local blacksmith, who will reveal the spiritual significance of the traditional Bakonzo stool. Basket weaving and fire making skills are also demonstrated along the route.

The trail then takes you across the Kamusonge River whose waters are believed to be sweet and quick to quench the thirst. There is a break in a hut to enjoy the glorious mountain views and shelter from the equatorial sun, before embarking on the final hour-long walk to the museum, thatched in the traditional Konzo style. On display are implements used during the Rwenzururu struggle, traditional dress and the other items of historical and cultural importance to the people of the Rwenzoris.

The tiny village of Mihunga faces the craggy, snow-capped peaks of Rwenzori Mountains. The Bakonzo tribe has lived here for over 300 years with no electricity or running water, and this community has adapted its way of life to the climate and steep green hillsides of the Rwenzori foothills.

Mihunga‘s community tourism group, Turaco View, takes visitors on a cultural tour of the village. This includes a demonstration by a traditional healer, whose herb-based concoctions are believed to cure many ailments. There is also a trip to the village school, a crafts demonstration and a lively dance performance.

Visitors can also choose to walk with a local guide through the surrounding forests. They may be lucky enough to spot brightly colored turacos in the forest canopy. The expert guides will be able to point out other species such as bee-eaters, sunbirds and playful black-and-white colobus monkeys.

With the support of USAID, the Rwenzori Mountaineering Services (RMS), are the sole providers of mountaineering services at Mountain Rwenzori, including logistical support to visitors, local guides, paths, signposts, bridges and mountain huts to direct some income from tourism to the local people to earn their support for the Park.

There are various accommodation facilities in Mt.Rwenzori National park that favour any visitor while on a hiking safari in Uganda, there are hostels at Ibanda, the Park headquarters and Rwenzori Mountaineering Services has graded the road to Ibanda where mountain hikes begin. Some facilities can also be found in Fort Portal; but we normally encourage our visitors to stay in Kasese town as it appears nearer.

Getting to Rwenzori Mountains National Park

Rwenzori Mountains National Park lies a few kilometers north of the equator on the Uganda-Congo border.

The park trailhead at Ruboni can be reached from Kampala from the north via Fort Portal (375km) or the south passing through Mbarara and Queen Elizabeth National Park (450km). Nyakalengija is 17km off the Kasese-Fort Portal road and 25km north of Kasese town.

Charter flights to Kasese air strip can be arranged from Kampala (Kajjansi) or Entebbe International Airport.