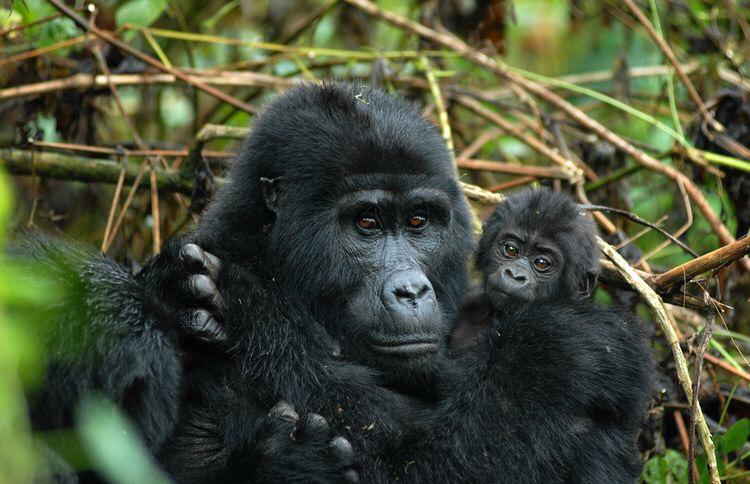 As the world still evolves in adapting to live with the world’s pandemic of COVID -19, Bwindi impenetrable national park has been welcoming new born gorillas in the past months in its 3 sectors.

The birth of these baby gorillas has showed how there is an increase in the conservation efforts of the regulatory bodies of tourism in Uganda. For the fact that the mountain gorillas where listed as endangered species by the international union for conservation of nature. Due to diseases such as Ebola, poaching and recurring civil unrest, the births in Bwindi and Mgahinga national park show hope of the continual prevention and conservation of these giant species.

The gorilla births took place in three sectors of Buhoma, Ruhija and Rushaga that are located in the different regions of Bwindi impenetrable national park in different gorilla families’ .This national park holds 50% of the world’s population of mountain gorillas.

Buhoma sector in the northern region of Bwindi; it is the most visited sector.  It welcomed 3 new born gorillas form different gorilla families. In this sector new births where welcomed first from the Mubare family the first habituated gorilla family in 1991. In this family mother Nyampazi gave birth to the first new born, later two new gorilla births blossomed from the Rushengura gorilla family. From the Rushegura family, mother Ruterana and kibande gorilla’s births of two baby gorillas increased the number to 18 individuals in the family and 9 members in Mubare respectively.

Ruhija sector is located in the eastern region of Bwindi, this is also another sector that is highly visited due to its easy accessibility. With only three gorilla families of Kyaguriro (for research), Bitukura and Oruzogo gorilla family. Katoto’s birth to a baby gorilla increased the numbers to 15 individual gorillas in Oruzogo.

Holding half of Uganda’s mountain gorillas, Mgahinga national park is another primate park that every tourist shouldn’t miss on their safari in Uganda. Nshuti of the Nyakagezi family, the only habituated gorilla family in the park gave birth to one baby gorilla. This birth increased the gorilla numbers to 9 in the Nyakagezi family.

All the births from Bwindi impenetrable and Mgahinga national park are for the mountain gorilla specie, which is the only specie of the eastern gorillas that is found in Uganda.  For an ultimate primate experience the pearl of Africa, I believe should be a place that you shouldn’t miss.

Mgahinga gorilla and Bwindi national park are located in the south western region of Uganda. For primate trekking, one shouldn’t forget to obtain the gorilla permit that costs 700$ currently.  And besides the primate experience, one can still enjoy the numerous wildlife in the savannah parks on their Uganda safari.

The births in these sectors have been a great venture to increase the population of the mountain gorillas in Uganda. Giving the fact that the primate parks have been opened up for tourism, with source from the Uganda wildlife Authority detailed document that was released on 3 September 2020.  This gives hopes in restarting the primate safaris around Uganda, and the exploration of the different   gorilla groups in the other sectors and gorilla groups.