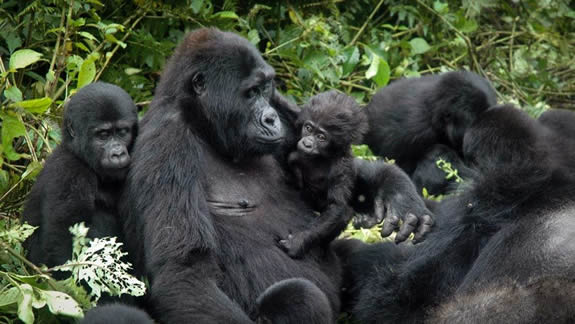 With a population of about 400 mountain gorillas (2011 census), Bwindi Impenetrable National park is home to half of the world’s mountain gorillas and it boasts to be a popular destination for gorilla safaris in Uganda. The park has a total of 12 fully habituated gorilla families that live within the four designated gorilla regions which are easily accessed by visitors looking for gorilla trekking adventure in Uganda.

Below are the different gorilla trekking regions and respective gorilla families in Bwindi national park.

The smallest of all gorilla families in Bwindi impenetrable national park, Mubare is dominated by 6 members under the leadership of 1 Silverback. The group is conveniently situated near Buhoma, the park headquarters, making it the easiest group to be accessed by trekkers.

Mubare group is the pioneer gorilla family and first to be habituated in Bwindi and Uganda at large. It was discovered within the Mubare hills, in the interior of Bwindi forest. The habituation process of this was completed in 1998. Mubare group started with only 12 members, headed by the dominant silverback “Ruhondeza”. In the past few years, the family has expended to up to 18 individuals.

Since then, the group has lost most of its members including Ruhondeza itself, due to endless fights with other wild gorillas. The group remained with only 5 members for a great deal of years until March 2013 when four other members including a new dominant silverback joined and it’s now an interesting gorilla family to track.

The Rushegura gorilla family was formed early 2002, following disintegration of one of the silverbacks from the Habinyanja group. The family started with 12 members – including 5 females though recently they grew to a total of 19 members. The group acquired its new name “Rushegura” as derived from a word, “Ebishegura” which refers to specific tree species that were dominant in the area inhabited by this new gorilla family. They are commonly seen within the compound of Gorilla sanctuary Camp near Buhoma village.

Habinyanja family comprises of up to 18 members with 2 silverbacks. The group was officially opened in 1999 when tourists first visited it. The name was derived from a native phrase, “Nyanja” which literally means a “lake / water body”. This group was first seen in a wetland in Bwindi impenetrable forest.

Visitors trekking the Habinyanja group require about 3 – 8 hours and it becomes easier when one stays at a lodge within the Buhoma region of Bwindi. The adult female gorillas are headed by the ambitious alpha female known as Kisho.

Bitukura group is one of the most attractive and well composed families in the region due to its uniqueness; including 4 silverbacks with Ndahura – the 2nd youngest silverback as the dominant.

Kyaguriro is a habituated gorilla family that is not open for trekking by tourists but a reserved section for research and other studies, related to primates and mountain gorillas. Keeping contact with this group helps conservationists to learn more about the mountain gorillas of Bwindi national park, including remarkable differences with the mountain gorillas that dwell in the neighboring Virunga region.

Nshongi group was the largest ever to be habituated with about 36 gorilla members and was officially launched in September 2009. It was named after river Nshongi, where this family dwells. Although most gorilla families consisting of up to 25 members usually have one or two Silverbacks, this was a strange one with 4 Silverbacks.

Silverback Mishaya in July 2010 decided to leave Nshongi Gorilla Group with some females and initiated his own family. Being a great fighter, he had the ability to gather more females from other non-habituated groups in the area, reaching a total group size of 12 gorillas, including three infants. Mishaya is the only adult in the group and is known for being a fighter who often starts interactions with other gorilla families.

The group size is 13 members with 3 silverbacks which are the only ones named. The dominant Silverback is called Rumansi followed by the other two old male gorillas named Rwigi and Ruhamuka respectively. The group was opened for visitors and gorilla tracking in 2011 but in less than a year the group split, creating the new Busingye Gorilla Family. Before the separation, the family consisted of 27 individuals including 3 silverbacks.

Bweza Gorilla Family is one of Nshongi Groups that used to be the largest ever habituated in Bwindi Impenetrable National Park. However, due to the July 2010 Silverback Mishaya decision to leave the group and start his own family, he left with reasonable number of them including Silverback Bweza. Towards the end of 2012, Bweza walked away with about 6 other members from the Mishaya Gorilla Group and became independent.

Early in 2013, there were speculations by the UWA park management that the Bweza split would return and re-bond with Mishaya but this happened and was later introduced for tracking.

Busingye Gorilla family is another splitter gorilla family having broken away from Kahungye Family back in June 2012. It was Silverback Busingye who decided to split and create his own family. Busingye is one of the newest groups in the park found in the Rushaga region close to Nshongi and Mishaya gorilla groups.

In January 2014, the group had 9 members including 3 infants, 2 adult female and other were youths or young teens.

The word Nkuringo is a local word meaning “round hill”; it’s a word from the Rukiga language, referring to the hill where the group was first sighted. Nkuringo group was launched in 2004 after 2 years of habituation.

The family was dominated by Silverback Nkuringo who died in April 2008, leaving behind 2 Silverbacks; Safari and Rafiki. Safari took over the leadership and the same year in November, newborn twins, Katungi and Muhozi arrived and expanded the family further. Unfortunately, Katungi died later at the age of 1½ years due to illness.