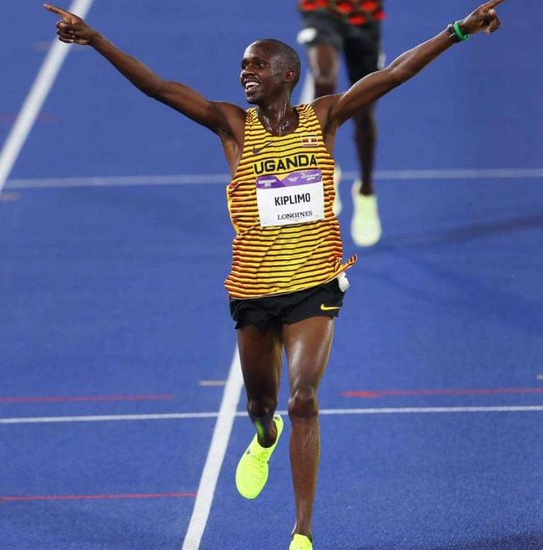 It’s the fifth straight Gold for Uganda at the distance!

Kiplimo Jacob wins gold for Uganda. In Sports, Uganda has done exceptionally well this year 2022! And it is our hope that the country continues to do even greater things like win more gold medals.

The ongoing 2022 Commonwealth Games in Birmingham, England has brought so much joy to Ugandans, especially after Jacob Kiplimo’s win in the 10,000m race. This was Uganda’s second gold medal in a space of just 3 days! The first gold medal was brought home on 30th July by Victor Kiplangat after participating and winning in the Men’s Marathon. #birmingham2022 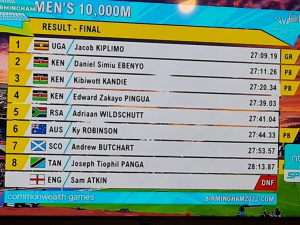 Ugandans are more than thankful that Jacob Kiplimo stepped up in the absence of world champion Joshua Cheptegi to maintain Uganda’s domination of the event. In second and third place was Kenya. The Kenyans controlled the pace during the event until Ebenyo and Kiplimo broke free later leading to Uganda’s win.

“I think for me winning this Commonwealth Games title was everything, the most important thing for me this season,” said Kiplimo. “But I still have a lot of things to do in the future at the Olympics and world championships.”

With Kiplimo’s outstanding victory, Uganda has now won the men’s 10,000m at every Commonwealth Games since 2006. What a record!!!

We love Jacob @Kiplimojacob256 and we also love the following representatives from Uganda. We thank them for giving of their skill and expertise to showcase the Pearl of Africa – Uganda.

Kiplimo is the youngest ever Olympian from Uganda, having competed at the 2016 Olympics aged just 15. In 2017 he won the under-20 category at the World Cross-Country Championships. He has also won a silver medal in the senior ranks at the World Cross-Country Championships. He also has set the fastest 10km time in history though it was on a course in San Silvestre that is unratified due to the extent of its downhill sections.