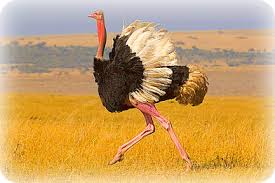 Facts about Ostrich in Uganda

Uganda is a spectacular destination that provides a safe home and habitat to variety of bird life and wildlife species which can be encountered during wildlife safaris in Uganda. Ostrich is the largest living bird species on earth and lays the largest eggs than any other bird. It is distinctive in its appearance with a long neck and legs, and also has the fastest land speed than any other bird. This bird can run as fast as 70 km/ hr.

An ostrich lays up to 15 eggs a month, and each egg is laid after every two days and they lay eggs during dry months of the year, usually in February and June. The male ostrich prepares the ground for laying eggs and will dig a hole of about 1 meter wide and 1 foot deep and later fills it with lake sand on which eggs are laid to generate warmth that would enable hatching.

Ostrich are also so vulnerable to predators and when threatened can run although they have powerful long legs that can be a formidable weapon capable of killing humans and potential predators like lions with a forward kick. Its body size ranges from 1.8-2.75 m and weighs up to 155 kg and mostly found in savannah areas, in the semi-arid and sometimes desert areas.

Ostrich produce giant eggs which is the largest of all living birds which can be 15 cm long and weighing as much as two dozens of chicken eggs. The eggs are incubated by the dominant female in the herd during the day and at night by the male in order to use their coloration to avoid detection of the nest as the drab female blends in with the sand and the dark male is very difficult to detect at night. The male defends the hatchlings (after taking 35-45 days incubation) and teaching them how to feed although both male and female cooperate in the rearing of the chicks.

Ostrich don’t have teeth and therefore swallow pebbles to grind their food and an adult ostrich can carry about 1kg of stones at any one time and can go without drinking for several days surviving on metabolic water and moisture in ingested roots, seeds and insects but enjoy liquid water and frequently take a bath where water is available. They possess very large eyes measuring almost 5 cm across allowing them to spot predators like lions within a long distance.

In some African countries people practice ostrich races where one seats on the back of an ostrich made with a special saddle, reins and bits. Ostrich in Uganda can only be found in Kidepo valley national park in north eastern part of the country and at the Uganda wildlife Education Centre; ostriches are apparently endemic to Africa living in Savannah semi – arid areas.